In the last post the needle bar screw, needle bar plug, and presser lever were removed.   This time we’ll remove the actual needle bar – I can tell you can hardly wait! Ha Ha

Before removing the needle bar I thought it might be a good idea to take pictures of the position of the various parts as the needle bar goes up and down.  Sounded good but this pesky little fork shaped part kept getting in the way, so I decided to remove it.  Isn’t there an old saying “when in doubt take it out”?

After reviewing the Adjusters Manual, I couldn’t find the official name for the fork shaped part so I’m calling it a “bar fork”.  (Perhaps there isn’t a name for this part in the adjuster’s manual because it isn’t supposed to be removed?)  it was pretty easy to take it out – 1 simple screw.  The first photo below shows the screw location and the second photo shows the part after removal. 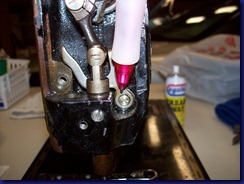 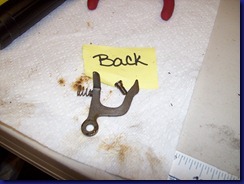 With that part out of the way, it was much easier to take pictures of the needle bar in the various positions through the stitch cycle.  I’m hoping this will help me put it back together when the time comes.

Needle up, thread take up lever down: 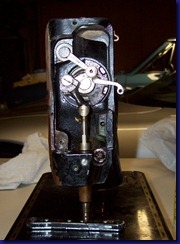 Needle down, thread take up lever at mid point: 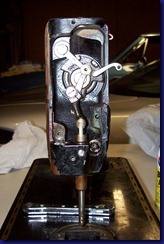 Needle up, thread take up lever up: 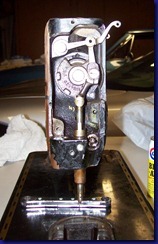 At this point it the time had come to take out the needle bar.  Theoretically it should have come out pretty easily, but as we’ve already learned, theory doesn’t work real well with Ms. Rusty.  So I had to tap out the needle bar (with a wooden dowel) just like the presser bar because it was glued in with rust and gunk.  It also became apparent why there is a hole where the needle bar plug is.  As you can see in this next photo, it wouldn’t be possible to remove the needle bar without this nifty little hole

Here’s the front-end of Ms. Rusty without the needle bar: 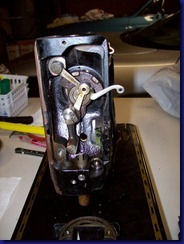 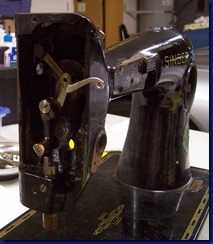 And here are some photos of all the parts that were removed during the presser bar and needle bar removal process.  It may just be me, but after all that work I expected to see a much bigger pile of parts laying there.  By the way, the presser bar is the longer of the two bars. 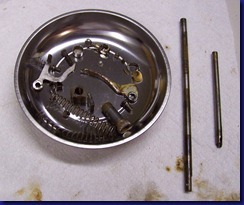 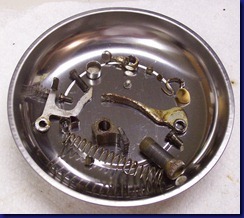 These parts (except for the oil wick) were then soaked in kerosene overnight to removed all the old grease and gunk.  They probably didn’t need to soak quite that long, but it doesn’t hurt them to stay in a bit longer.

Then the parts were soaked in Evapo-Rust to eliminate any surface rust.  My intention was to soak them for just a few hours, but I forgot about them and they ended up soaking for almost 36 hours!  Not surprisingly, Some of the parts, especially the bars, were blackened with oxidation.  This isn’t unexpected when you leave the parts in too long since this is one of the warnings listed on the label.

It was fairly easy to remove the black stuff by very lightly sanding the surface of the parts with a fine-grit sand paper.

Then I treated the parts to a spa treatment by lightly rubbing them in sewing machine oil. 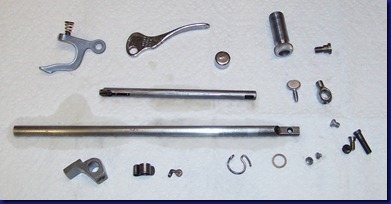 I then put the oil wick into the thumb screw and applied a liberal amount of oil to the wick.  I pulled it out temporarily after it was partially soaked to show you the difference between dry oil wick and oil filled wick.  The narrow light colored band on the left is the dry portion of the wick.

Then I placed the parts in a labeled zip lock bag so they are all ready for reassembly in the future. 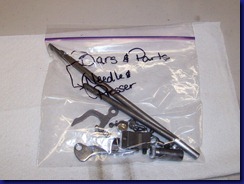 Now what should I tear apart next?  Hmmmm……