True to my word, today and tomorrow’s segment will be on how I removed the needle bar from Ms. Rusty. Notice I did NOT say this is a tutorial on the correct way to remove the needle bar.  The reason is because I don’t recommend doing things the way I did, but it seemed to work for Ms. Rusty. 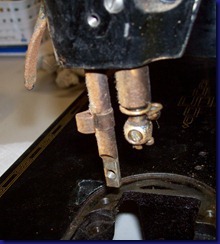 My next step was to remove the screw holding the needle bar in place.  The only way to access it is through a hole on the back side of the arm.  In the photo below I tried (although perhaps failed) to show where this hole is by poking a pink pen through it. 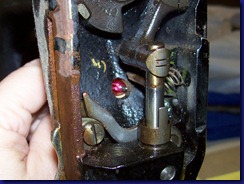 At this point I needed to move the needle bar to the down position.  Surprisingly, since the presser bar was removed the needle bar moved quite freely. 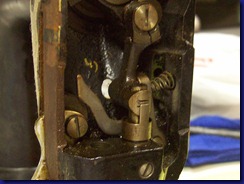 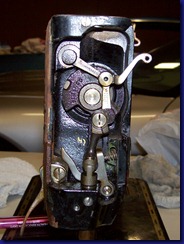 In the ‘down’ position it is possible to see, and remove, the screw through the hole on the back side of the arm.  A flashlight worked quite well to see enough to remove the screw, but didn’t work so well to take a photo.  The flash on my camera worked better for taking pictures (go figure). 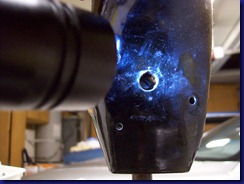 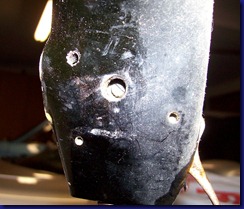 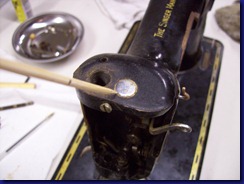 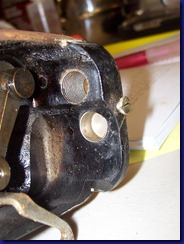 It was supposed to be removed from the bottom out through the top, but of course Ms. Rusty rebelled against the Adjusters Manual instructions once again.  At this point I thought it would be worth trying to tap out the needle plug.  The tried using an allen wrench, or hex key, as shown in the photo below. 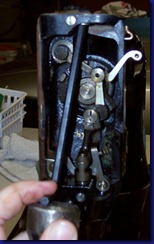 This turned out to be a BAD IDEA.  I ended up making a dent in the plug and it didn’t budge at all.  At this point I knew that if I were to tap this out it would require something with a wider diameter that would spread the force across the entire face of the plug.  Did I have anything appropriate available? Of course not, so a trip to Home Depot was in my future.

I ended up purchasing a 7/16” wooden dowel, but it needed to sanded down just a bit to fit inside the plug.  After gently tapping the plug with a hammer using the wooden dowel to distribute the force I made some progress, but not much.  On a lark I tried using the dowel and gently tapped the plug from the top and plug popped right out! 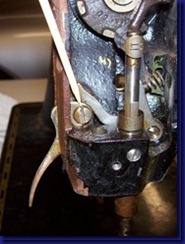 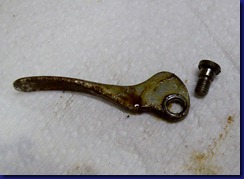